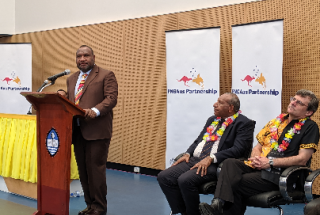 The 2019 PNG Update, co-hosted by Devpolicy and the University of Papua New Guinea’s School of Business and Public Policy, was held on 8-9 Aug in Port Moresby, and joined by PNG’s new PM James Marape.

The conference was covered by various media outlets:

If you missed out on the conference, you can access the final program and abstracts here, and copies of presentation here. Some Facebook steams are available on UPNG’s Facebook page.