The publications lists on this website will not be maintained after April 2022. All Devpol monographs can be found on the Devpolicy Blog site 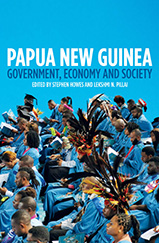 Papua New Guinea (PNG), a nation of now almost nine million people, continues to evolve and adapt. While there is no shortage of recent data and research on PNG, the two most recent social science volumes on the country were both written more than a decade ago. Since then, much has changed and much has been learnt. What has been missing is a volume that brings together the most recent research and reports on the most recent data. Papua New Guinea: Government, Economy and Society fills that gap.

Written by experts at the University of Papua New Guinea and The Australian National University among others, this book provides up-to-date surveys of critical policy issues for PNG across a range of fields, from elections and politics, decentralisation, and crime and corruption, to PNG’s economic trajectory and household living standards, to uneven development, communication and the media. The volume’s authors provide an overview of the data collected and research undertaken in these various fields in an engaging and accessible way.

» download for free (or purchase the book) at ANU Press 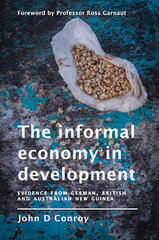 Economic informality – originally identified by Keith Hart – arose under colonial rule because of the imposition of bureaucracy and the forced introduction or intensification of market economy. Informality challenges bureaucracy by failing to conform and a metaphor of pushback suggests how subject peoples accommodated themselves to colonial economy. The Western victors of World War II adopted an ideology of ‘economic development’. This provided a rich environment for the emergence of informal and hybrid economic behaviours in late-colonial territories and new states. The Informal Economy in Development explores these themes in the former German, British and Australian colonies which preceded the modern state of Papua New Guinea, while an Epilogue considers the present status and future prospects of economic informality in PNG. The book is available to download for free.
» download whole book
» download Prelims, Foreword and Preface
» download Part A: Economic informality – An idea and its relevance to Melanesia
» download Part B: From early colonisation to the Pacific War
» download Part C: Informality in the era of economic development
» download Part D: Birth pangs – All these are the beginning of sorrows and Epilogue 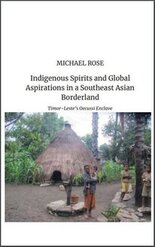 Over the past 40 years, life in Timor-Leste has changed radically. Before 1975 most of the population lived in highland villages, spoke local languages, and rarely used money. Today many have moved to peri-urban lowland settlements, and even those whose lives remain dominated by customary ways understand that those of their children will not. For the Atoni Pah Meto of Timor-Leste’s remote Oecussi Enclave, the world was neatly divided into two distinct categories: the meto (indigenous), and the kase (foreign). Now matters are less clear. We are sharing the open-access version of Michael Rose’s book here for researchers as part of the Amsterdam University Press green access scheme.
» download open-access version
» AUP book purchase

The relationship between aid and state building is highly complex and the effects of aid on weak states depend on donors’ interests, aid modalities and the recipient’s pre-existing institutional and socio-political conditions. This book argues that, in the case of Afghanistan, the country inherited conditions that were not favourable for effective state building. Although some of the problems that emerged in the post-2001 state building process were predictable, the types of interventions that occurred—including an aid architecture which largely bypassed the state, the subordination of state building to the war on terror, and the short horizon policy choices of donors and the Afghan government—reduced the effectiveness of the aid and undermined effective state building.

By examining how foreign aid affected state building in Afghanistan since the US militarily intervened in Afghanistan in late 2001 until the end of President Hamid Karzai’s first term in 2009, this book reveals the dynamic and complex relations between the Afghan government and foreign donors in their efforts to rebuild state institutions. The work explores three key areas: how donors supported government reforms to improve the taxation system, how government reorganized the state’s fiscal management system, and how aid dependency and aid distribution outside the government budget affected interactions between state and society. Given that external revenue in the form of tribute, subsidies and aid has shaped the characteristics of the state in Afghanistan since the mid-eighteenth century, this book situates state building in a historical context.
» Routledge book purchase